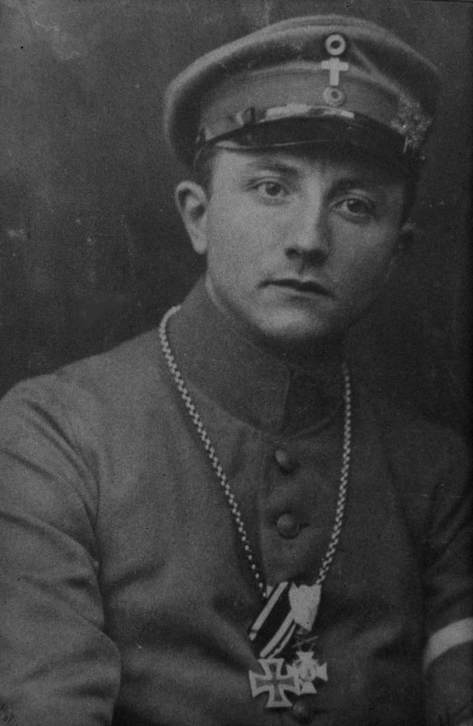 Max Josef Metzger as a Division War Chaplain in World War 1914-1915
Dr ​Max Josef Metzger, founder of the Una Sancta Ecumenical Movement was born in Schopfheim in the Black Forest on February 3rd, 1887. Ordained as a priest in 1911 he was a man of great vision and courage, and might be described today as a type of religious ‘entrepreneur’ - always turning his mind to new and needy areas and seeing how he could evoke a response from the faithful or from authorities to meet these perceived needs. According to Leonard Swidler he ‘was never a person who could be satisfied with operating on a limited scale; he always attempted to draw ultimate conclusions and organize things on a world-wide basis. “[1] In succession he turned his interests to the needs of alcoholics, operating alcohol-free restaurants, then running homes for the aged, for epileptics, convalescents and young and working girls. [2] [1]  After his own experience as a Chaplain in World War one he turned his thoughts to World peace and founded the “Weltfriedensbund der Weiße Kreuz,” co-operating with the International Fellowship of Reconciliation (IFOR). 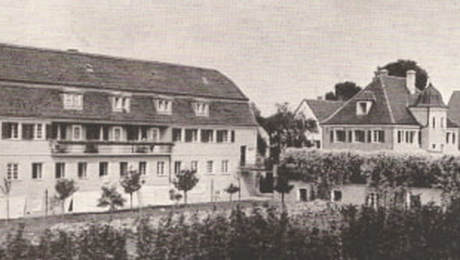 Gesellschaft Christi des Konigs Meitingen nr Augsburg
​Later, moving to the town of Meitingen near Augsburg in 1938, he opened a center for alcoholics and founded another society of men and women, married and single, called the Gesellschaft Christi des Königs. This community was dedicated  to perform pastoral and spiritual works of mercy, and to work for world peace and Christian unity. It was not long in these pre-war times that his mission got him in trouble with the Nazi Government, and he experienced several periods of imprisonment. Even when his hands and feet were bound in chains he experienced a great desire to sing to relieve his feelings. He wrote:
“In spite of loneliness I am not bored. I study, read and write: I compose music and write poems, even if the music can’t all be put down on paper…I have written three People’s Masses in German, one of which I have sent to you”[1] 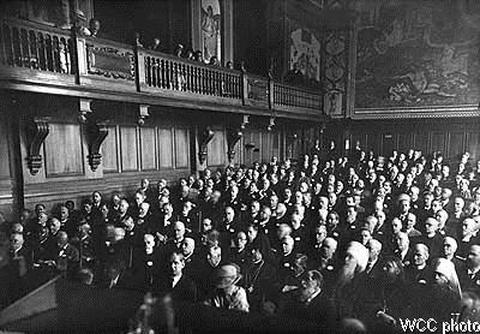 Delegates at Lausanne World Conference of Faith and Order 1927 attended by Dr Max Josef Metzger
WORLD CONFERENCE ON FAITH AND ORDER LAUSANNE 1927 AND THE BEGINNING OF UNA SANCTA
​
​A turning point in his life came after attending the non-Catholic World Conference of Faith and Order in Lausanne with the status as a Catholic ‘observer’.  Upon his return, and with the inspiration of his ecumenical experience in Switzerland, he decided to found a new organization he called the “Una Sancta Brotherhood”. The aim of this group was to help create better Catholic-Lutheran relations. Although ecumenism was not new in Germany, his organization seemed to have a way to accelerate these efforts, giving them more structure, vision and forward motion. Travelling throughout Germany and, making use of all his previous contacts, he sought to set up inter-confessional groups in all its major cities. The purpose of Una Sancta was thus to ‘serve rapprochement and mutual understanding’ between Christians  of different confessions, in  view of the ‘last words of the Common Lord, ‘That they may be one’. [1] This might involve simple fellowship meetings between local denominational clergy, or a lecture series in a neutral location, covering all areas of Christian doctrine. These gatherings were not to be open to all, in order to avoid polemics or possible argumentation. Thirdly he envisaged discussion groups of mature people of different confessions where there would be two different talks on a given topic given by speakers of different confessions, followed by free discussions by all. 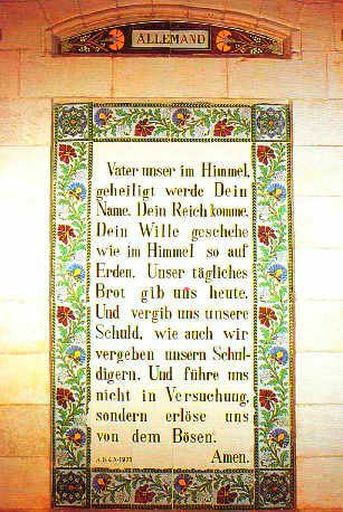 The Our Father used to help common prayer at meetings
"These meetings would open and close with common prayer or scripture, or prayers such as the Apostles Creed or the Our Father. In addition, because of the adverse political climate, everything had to be done to avoid suspicion by the police. Metzger’s hope was that such meetings would help different Christians to see how much they held in common, and that apparent doctrinal contradictions were more due to different terminologies and linguistic expressions and were not in fact  ‘deep-seated’ or fundamental to common belief. To encourage this ‘re-union’ of Catholics and evangelicals  he wrote in his newspaper in 1934:“ Catholic brothers in faith, become evangelical! Not that you should leave the Catholic Church, but that you should fulfill its real and ultimate calling. Evangelical renewal, a thorough Christianization of the Church is the essential prerequisite, so that the serious Christian of the Evangelical Church may recognize that here is Christ and his Gospel pure and unfalsified, in full unbroken vital power".
​As a response to this favorable reaction to his appeal, Dr Metzger proceeded to organize annual conferences in his center in Meitingen, the first  taking  place during Pentecost 1939 and the second in August 1940 on the subject of ‘The Church’. Both were a successes and described as being very ‘harmonious’, drawing  numerous Lutheran Clergy together with University Professors and Pastors from his own Society of Christ the King,  Augustinians, Benedictines, Jesuits and Carmelites. The meetings however were hounded by the Gestapo who were making arrests across Germany, and Dr Max Josef decided to move to Berlin and carry on his work there.
​
REQUEST TO POPE PIUS FOR AN ECUMENICAL COUNCIL? 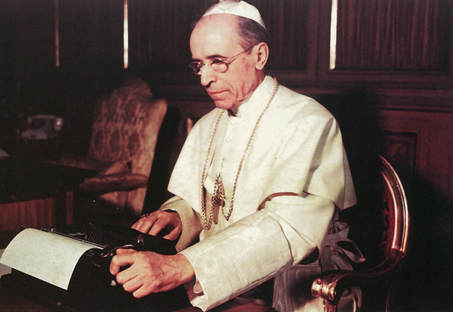 Pope Pius XII
​Seeing the need to grow this ecumenical endeavor, he wrote to Pius XII, sharing that non-Catholics had remarked that a ‘certain self-righteousness prevented the church from acknowledging its faults and errors, making the non-Catholics feel the Church was not able to serve in humility, but rather only with authority and a thirst for power and an all ‘too human spirit of self-assertion’.[1]   He was suggesting the need for a new Church Council to face these and other issues, and, as a prelude he suggested to have  groups of twelve outstanding Catholic theologians and twelve outstanding non-Catholics in various territories  to meet  and then to report to the Vatican on their findings with a view to preparing for such a General Council.  He commented  ‘Church history and world history alike will raise a memorial to that wearer of the triple crown who begins that work on a generous scale and to the one who may perhaps finish it later’[2]. 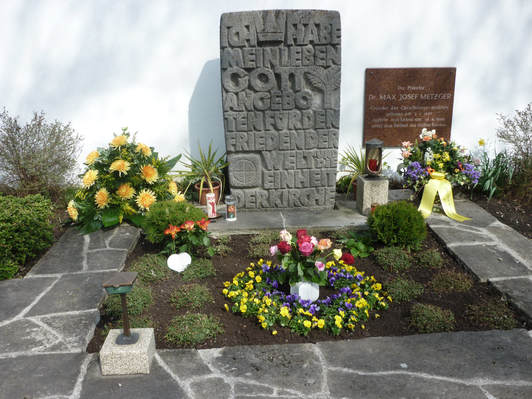 Grave of Fr Max Metzger in Meitingen
​When the sentence was declared Dr. Max Josef felt he had been honored. Able to speak to one of his associates before being removed from the court room he said,
‘Now it is over, I am at peace. I have offered my life to God for he peace of the world and the unity of the Church. If God accepts it, I will be glad; if he grants me a longer life, I shall also be thankful. As God wills. ‘ [1] On the day of his execution a prison guard witnessing the scene said     ‘Never have I seen a man die like that’ [2] When his co-workers in the Society heard that he had been executed they sang a ‘Te Deum’. Dr. Max Josef  was buried in St Hedwig’s Cemetery in Berlin, he celebrant declaring that  ‘ He lived and died for the peace of nations and the re-union of faith.’Later his remains were brought back to be interred in his native Meitingen.
[1] Op. Cit p.241
[2] Op Cit. p.165

THE GROWTH AND INFLUENCE OF UNA SANCTA AFTER THE WAR​ 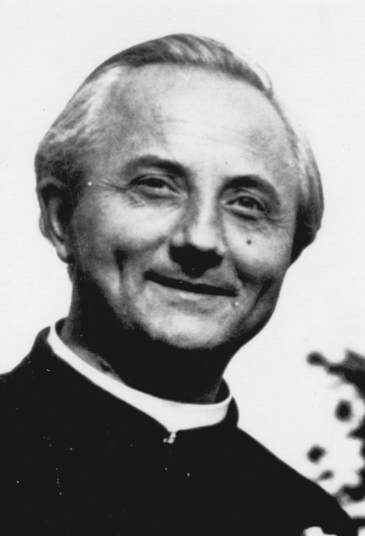 Dr. Max Josef Metzger c.1940 Meitingen
Through his death and the death of other martyrs for faith, both Catholic and non-Catholic, Una Sancta experienced extraordinary growth from 1945-8. Now a broad mass of people were hungering for an end to the divisions of faith, caused in the wake of the Reformation. They wished to see a visible church, pure in faith and freed from all political concerns, overtones and corruption.   Despite opposition and various crises, it had realistically helped to create a common ground between the churches that had not existed prior to the war, nor indeed since the Reformation.